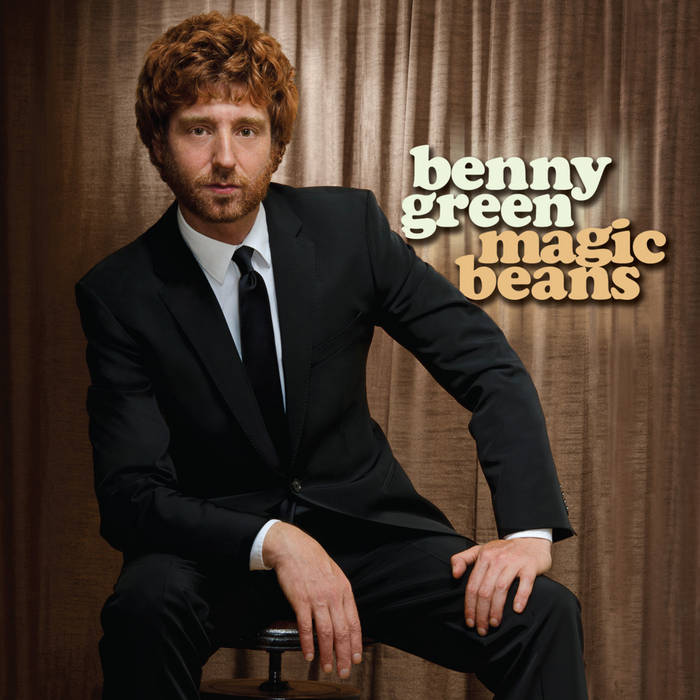 Benny Green possesses the history of jazz at his fingertips. Combine mastery of keyboard technique with decades of real world experience playing with the most celebrated artists of the last half century and it's no wonder Green has been hailed as perhaps the most exciting hard-swinging, hard-bop pianist to emerge from Art Blakey’s Jazz Messengers.

For his historic Sunnyside release, Magic Beans, Green crafted ten new pieces performed by his working trio. Remarkably, this release marks Benny’s first self-produced trio recording of all original compositions in a career that spans decades: notably as a star sideman with Betty Carter, Art Blakey, Freddie Hubbard, and Ray Brown and culminating in over 20 years as a leader.

While having favored to sprinkle his recordings with standards, Benny Green has always been a composer, contributing new music to all of his leader dates, as well as records by Blakey, Hubbard, and Brown. However, in 2012, Benny experienced what could only be characterized as a compositional break-through—prolifically writing all the tunes recorded on Magic Beans in what was, seemingly, one afternoon. Benny then decided to embark on the recording of this album with his trusted Messenger mates: the brilliant Peter Washington on bass and the legendary Kenny Washington on drums. Thus, Magic Beans took root.

This highly personal recording begins with the inviting “Benny’s Crib”, inspired by the classic sound of the Blue Note label trumpet-saxophone quintets. The bouncy “Kenny Drew” follows —a sketch of the famed pianist whose prolific 1950s work inspired Green. Kenny Washington offers a lesson in brushwork here. “Flying Saucer” is written in a style reminiscent of Elmo Hope or Tadd Dameron, the title alluding to Green’s fascination with 1950s science fiction radio shows. “Jackie McLean”, written for the luminary saxophonist, leans toward an aggressive Latin feel.

On “Vanished”, Green expresses a full spectrum of emotion with economy in orchestration. “Harold Land”, named after the west coast saxophonist, is an unparalleled example of classic piano trio swing. Saxophonist Tina Brooks is the musical inspiration for “Magic Beans”, a composition blending Latin vamps and straight-ahead swing with the story of Jack and the Beanstalk in mind. “Paraphrase” is titled because of its reference to a rhythm from Ellington’s “It Don’t Mean a Thing”. The sensual “La Portuguesa” is a mini suite that connects three moods or scenes: a country road at dusk, the lustiness of the bedroom and, ultimately, romance. And finally, concluding Benny’s musical journey is “Further Away”, a piece that is both swinging and cinematic.

Born in New York in 1963, Benny Green grew up in Berkeley, California, and began classical piano studies at the age of seven. Influenced by his father, a tenor saxophonist, his attention soon turned to jazz: “I began trying to improvise on the piano, imitating the records I'd been hearing from my father's collection, which included a lot of Monk and Bird… it was a gradual process of teaching myself.” Benny never looked back and never stopped learning as his blossoming talents, supported by mentors such as Walter Bishop, Jr. and others, plus his love for the music propelled him to the upper strata of jazz luminaries.

Green’s list of credits, accomplishments, and accolades could literally fill a book. His recordings with the masters form a foundation of his jazz education. Some notable highlights include: touring with Betty Carter for four years and realizing a life long dream of becoming a Jazz Messenger. In 1993 Oscar Peterson chose Benny as the first recipient of the City of Toronto's Glenn Gould International Protégé Prize in Music culminating in Oscar & Benny (1998) recorded for Telarc. Green has appeared on well over one hundred recordings with legendary artists Betty Carter (including Grammy award winner Look What I Got), Art Blakey & the Jazz Messengers, Freddie Hubbard, Bobby Watson, Milt Jackson, Diana Krall, and particularly featured in Ray Brown's trio series for Telarc: Bass Face (1993), Don't get Sassy (1994), Some of my best friends … (1994), Seven Steps to Heaven (1995), Super Bass (1996) and Live at Sculler's (1996).

As the leader of his own ensembles, Green's recording career began with two albums for the Dutch label Criss Cross: Prelude (1988) and In This Direction (1989). In 1990, Green started recording for Blue Note: Lineage (1990), Greens (1991), Testifiyin' (1992), That's Right! (1993), The Place To Be (1994), Kaleidoscope (1997) and These Are Soulful Days (1999). In 2000, his debut recording on Telarc Jazz entitled Naturally was released, which featured bassist Christian McBride and guitarist Russell Malone. Green released the solo piano date Green's Blues (Telarc, 2001) and Jazz at the Bistro (Telarc, 2003), a duo recording Malone, followed by Bluebird (2004) again pairing Green with Malone. After a short hiatus from recording, Green produced a 2011 trio date, Source (JLP).

With this recording, Benny Green steps out as the bearer of the torch and guardian of a legacy handed down to him, personally, by his musical mentors. Magic Beans delivers the message that swinging is never out of style.

All music composed and arranged by Benny Green